Everybody knows that Bandung is the culinary paradise of Indonesia. There are so many tourists that come to Bandung specifically to have an exciting culinary adventure. When it comes to Bandung, the choices of delicious food are unlimited. You might have heard about some popular foods such as Serabi, Colenak or Cireng. They are very mouthwatering and all, but your journey in this city will not be complete before you have a taste of the best culinary in Bandung that is Batagor.

It is almost impossible to mention Bandung without having our mind reminded to Batagor. Nowadays, this food has become very well-known that you can easily find it in other cities. But there is something special and different when it comes to Bandung’s Batagor. So, if you want to know the authentic and original taste of Batagor, it is something you can only get in Bandung.

Batagor is an abbreviation from Bakso Tahu Goreng, or can be translated as fried bakso (meatball) and tofu. The dough is made of fish, and basically any type of fish can be used to make this, but tenggiri (wahoo fish) is the most common ingredients due to its soft texture and savory taste.

Basically, this food is similar with siomay (shumai). However, while siomay is steamed, Batagor is fried, making it has a crunchy texture, which is different with siomay’s overall soft texture. Beside the fried version of siomay, you can also have a taste of the fried tofu. But Batagor is not just a mere fried tofu. The tofu is usually cut into half in triangular shape. And then the inside of the tofu is taken out and replaced with wahoo fish meatball dough. The end texture will be chewy and the taste of the tofu and the fish meatball complementing each other.

The magic doesn’t end there. Batagor becomes even more mouthwatering because it is accompanied with delicious peanut sauce. The consistency of the peanut sauce that is a little bit rough makes it a perfect complement for the chewy Batagor. If you like spicy food, you can also put a little bit of chili sauce.

Batagor is a very popular culinary in Bandung so no matter where you are or to which direction you are looking at, you definitely can find a place that is selling Batagor. So, prepare your tummy because one serving of Batagor certainly will not be enough due to how good it tastes. 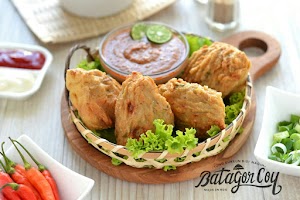 Mat Lauren
23:30 27 Dec 17
The Batagor Kuah (Batagor Soup) is more refreshing, especially when having it in cold weather. The only thing is only it should be serve faster because it takes a long time to make it compared with the Original Batagor (fried). They have new drink menu which I tried, Manggo Coy, the taste is very authentic since I think they don't add sugar on it.

Melisa Stevia
11:38 27 Jan 18
It is a small place yet so interesting. U will never miss this place as it very visible at the road side and the design is clean cute! The food was good, we had their Batagor (it was good, no fishy feeling on your tongue like what I usually get when i eat batagor at the roadside , the peanut sauce was amazing), their Yamien hmm for those who like spicy im pretty sure, it will make your day! Well, the price is standard. I had 2 Yamien, 1 Batagor, 1 Drink. It was only 54K rupiah

Ikhsan Awaludin
18:00 17 Dec 17
Delicous batagor in Bandung city. Recommended for you batagor hunter. You will get offer by various menu of batagor that you can't find in other place. Not mainstream batagor.